How to vote for Nina Springle in North East Metro: 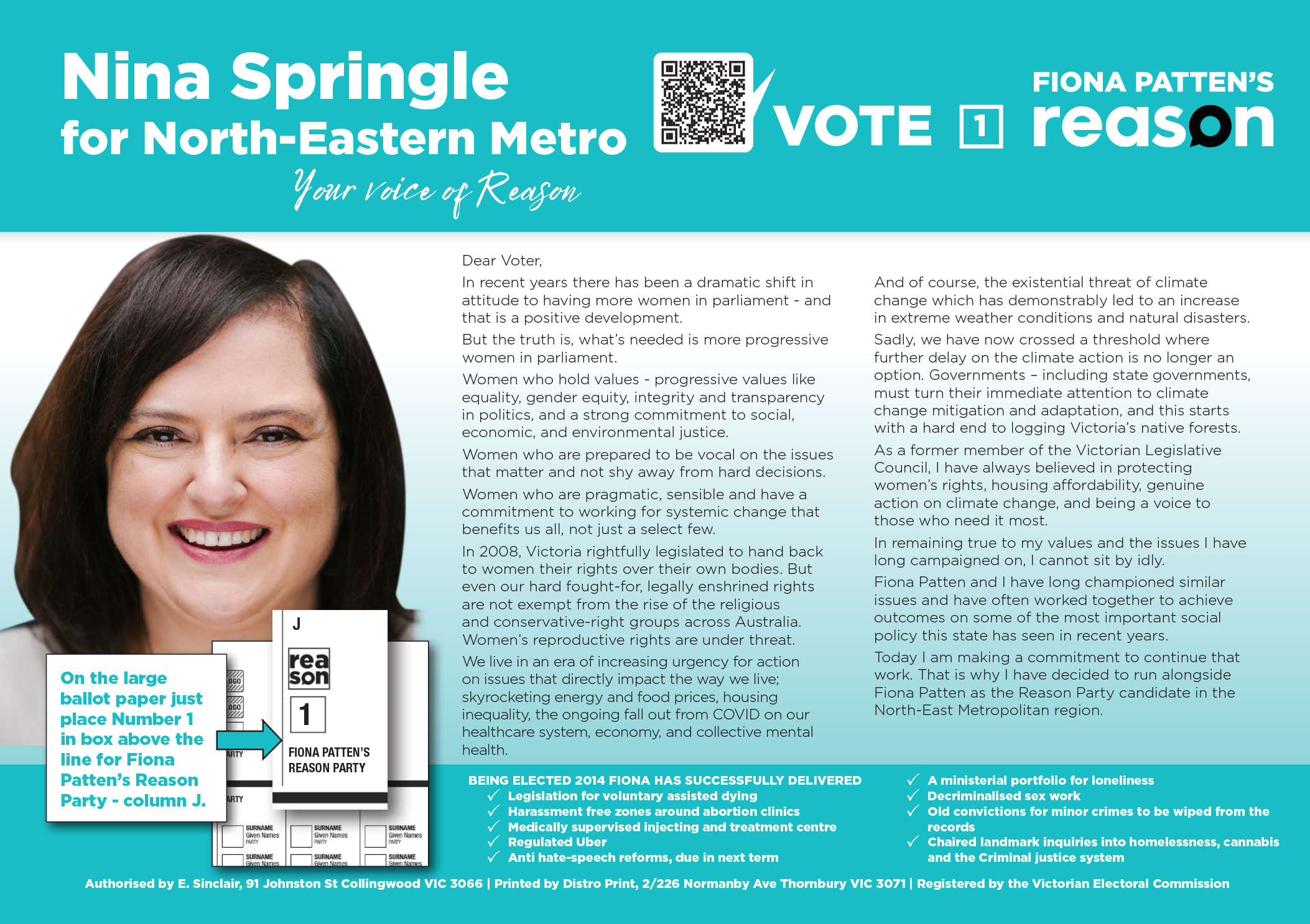 Reason Victoria today announced that former MP, Nina Springle, will be representing Reason in the upcoming state election for the Seat of North Eastern Metropolitan.

“I’m delighted to confirm Nina Springle will be joining Reason’s 2022 State Election team,” said Fiona Patten MP. “With a long history of advocating equality, gender equity, integrity and transparency in politics, and with her strong commitment to social, economic, and environmental justice, Nina embodies everything the Reason Party stands for”.

“Ms Springle and I worked closely together during the 58th parliament of Victoria, particularly around the introduction of Voluntary Assisted Dying Legislation, and I look forward to working her again in the 60th Parliament.”

“In 2008, Victoria rightfully legislated to hand back to women their rights over their own bodies. But even our hard-fought-for, legally enshrined rights are not exempt from the rise of the religious and conservative-right groups across Australia. Women’s reproductive rights are under threat.

We live in an era of increasing urgency for action on issues that directly impact the way we live; skyrocketing energy and food prices, housing inequality, and the ongoing fallout from COVID on our healthcare system, economy, and collective mental health.

And of course, the existential threat of climate change which has demonstrably led to an increase in extreme weather conditions and natural disasters.

Sadly, we have now crossed a threshold where further delay on climate action is no longer an option. Governments – including state governments, must turn their immediate attention to climate change mitigation and adaptation, and this starts with a hard end to logging Victoria’s native forests.

As a former member of the Victorian Legislative Council, I have always believed in protecting women’s rights, housing affordability, genuine action on climate change, and being a voice to those who need it most.

In remaining true to my values and the issues I have long campaigned on, I cannot sit by idly.

Fiona Patten and I have long championed similar issues and have often worked together to achieve outcomes on some of the most important social policy this state has seen in recent years.

Today I am making a commitment to continue that work. That is why I have decided to run alongside Fiona Patten as the Reason Party candidate in the North-East Metropolitan region.”

Reason has unfinished business in this parliament.

Our 2022 state election candidates will be fighting to:

Come back soon to meet your local candidate.